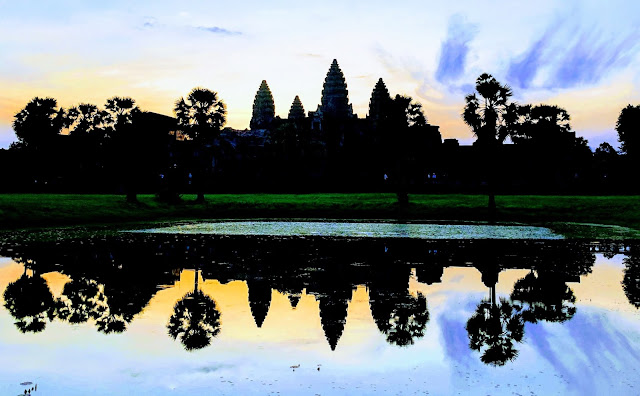 I had wanted to see Angkor Wat, ever since I had seen Lara Croft - Tomb Raider sometime in 2003-04. The entire sequence that was shot at the Ta Phrom temple had left me mesmerized with this location and I just added it to my bucket list. Finally, I could visit this place some 15 odd years later. Even though the forecast was that of rains, I wanted to take our chances. Hence, we added a two day itinerary for Cambodia to our trip. Here it is:

If the plan is to visit Angkor Wat, then Siem Reap airport is your best choice. It is a tiny upscale airport catering mostly to Angkor Wat tourists. It has plenty of connections from other South east Asian countries. However, if you plan to visit Phnom Penh and other cities, you can explore other airports.
Also, when I was exploring options to visit from Thailand, there were trains and buses too. The reviews weren't that great, especially for the immigration check as apparently they are time consuming if you enter via road. But I didn't explore much.

We arrived around afternoon and our hotel had a airport pick up and airport drop included in our booking. We were flying via Kuala Lumpur again as we had our bookings via Air Asia. Immigration and baggage pick up were very quick and easy. We had gotten our e-visa online before we had left USA.  We however, got some local currency at the money exchange counter. You can totally avoid it as US dollar is the defacto currency here. But, they are very particular about the quality of your notes.
We were greeted by hotel staff and taken to our hotel, The Privilege Floor, Lotus Blanc which was just 15 minutes away. Our check-in took sometime as they explained us all the options to go to nearby markets, Angkor Wat, etc. To be honest, my information on Angkor Wat was much more updated than theirs. They didn't know much about the tickets and times of visit. Our plan was to go get the tickets for the next day, which starts selling at 5:00 pm or so and then go see sunset.
So, we hired a romrok to take us to the ticket office, which is a little farther than Angkor Wat. Here, we had to wait for sometime for the ticket counter to open. Closer to the opening time, long queues started forming. So, we stood in the line and the ticket counter opened up. When we asked for our ticket, they refused to take credit card in spite of having big labels saying we accept visa and MasterCard. Then, we tried to scramble for cash. We found 20$ bills, but they refused to accept some of them saying they have a mild tear, they are folded, etc. Basically, they want you to use their ATM to withdraw cash and use that. We did have an argument with these folks about the mismanagement, but they were very non chalant and used to this everyday affair.


Anyhow, after we were done getting our tickets, we headed straight to Bekhong hill for a sunset view. But they allow only a fixed number of people to enter the complex. And we were pretty late. For a sunset at 5:30 pm, the queues start forming at 3:30! So, we were pretty late and didn't get in. We walked back and got back to our hotel.
After a brief rest, we decided to head out to the Siem Reap market for some dinner. There were a few Indian options and my spice buds were dying for some good desi food, so we headed to Dakshin and I ordered a south Indian thali and ate to my heart's content. Loved the food. Super authentic and super tasty. The area was lively, but we were tired and decided to go home and take rest for the early sunrise the next day.

We had asked our hotel staff to give us boxed breakfast so that we could go watch the sunrise at Angkor Wat temple. We had hired a cab for the day to save ourselves from scorching heat and long walks with in the complex. Best decision ever.
We got up early and headed to the complex while it was still dark. All the crowd were heading in one direction, so we couldn't get lost. Get there early to grab your spot next to the pond where you see the reflection. There are two of these, one on either side of the temple. The one on the left (while you face the temple), is the better choice. And, you cannot go wrong with this picture. It is magnificent. But all the street vendors trying to sell you all the stuff kind of get on to your nerves. Plus, wear mosquito repellents. Plenty of tiny little ones here.
After the sunrise, we headed inside the complex. I loved it. It was my first time going to a Hindu complex that was so ancient and old. I was absolutely in love with it. Then, as you walk further in, there is another queue to get into the central, tallest complex. Luckily, we were on time and got in that queue. It was a steep staircase to get to the temple. This temple is layered vertically. This was the highest courtyard inside the temple. Good views and really high. After a few minutes we came down. Stairs were so steep that I had to sit on every step and come down. Just couldn't climb down the steps normally.
Once out, we were hassled by some vendors to have breakfast at their shop, but we managed to evade and get to our car. Here we had breakfast, breathed some cool air and headed to our next  temple, Bayon temple (the face temple). Another beautiful complex and we got some awesome pictures here. We did not hire any guide, as we wanted to spend less time and thought we'd read the history and details once we get to our hotel. It was just too hot and humid to have any patience for guides.
Once we were done, we headed to Ta Phrom temple via Terrace of Elephants. It makes for a few good shots.
I had wanted to visit Ta Phrom since so many years and finally here it was. This temple is currently under restoration in partnership with Archaeological Society with India. One of the guards here, was kind enough and led us through the temple and took pictures for us. He gave us a good "photo tour" here and Sumit and I were happy kids. We tipped him well after we were done. Half of this temple is in ruins and the other half is in roots, literally. Beautiful. Then we headed to New Delhi restaurant for lunch. Average food, but a decent Indian option. After this, we went to our hotel for some well deserved rest from the heat and humidity. Btw, while flipping channels I was happy to see some desi channels here, dubbed in their local language. Was hilarious.


After this break, we headed to Bekhong hill. We reached 3:30 pm and were able to get in. View was good, but just 30 minutes before the sunset, it started raining and we had to head back. So, in other words, we didn't see any sunset here.


Later in the evening, we headed to the marketplace. Strolled on some streets, Pub street looked really lively. I got henna done at one of the shops. Picked up some souvenirs. I had wanted to get the fish pedicure, but since I had an open wound on my ankle, due to the bike fall in Bali, I decided not to take a chance.

We had our flight in the evening. So we slept till late and then spent time at the hotel They had a great pool and a private restaurant for breakfast. Then we packed and headed to the airport for our final destination of this trip. Luckily it was a direct flight. We spent some time in the airport lounges, thanks to our priority pass form Chase! Cambodia was brief and sweet.