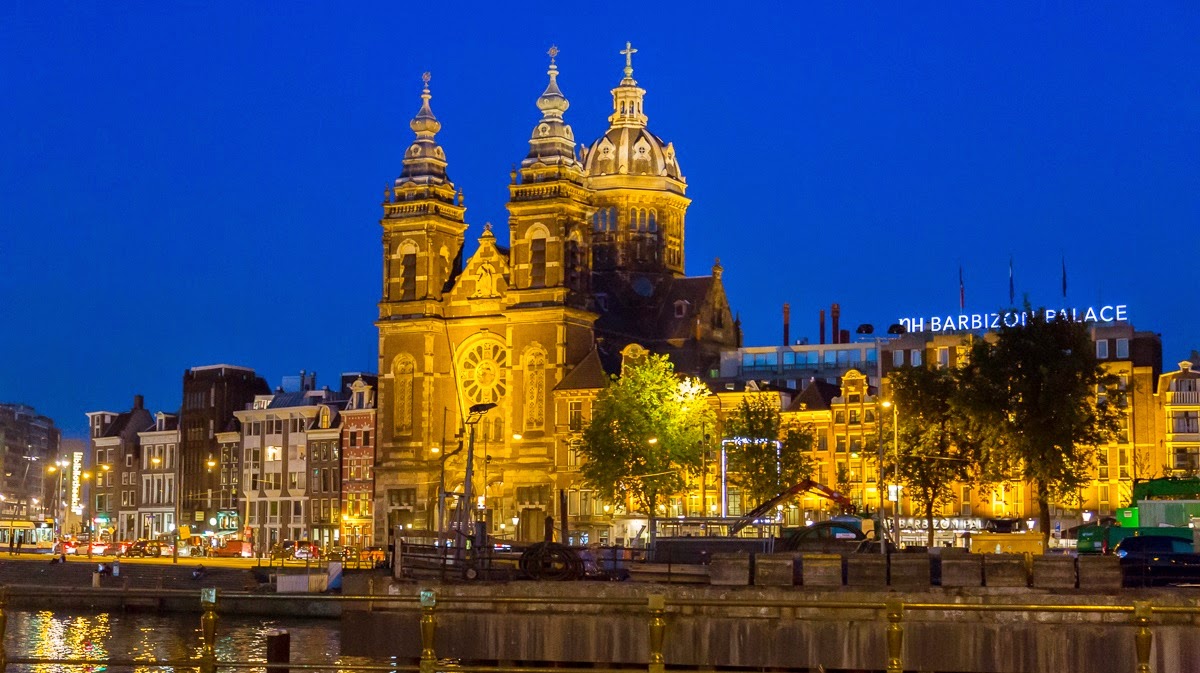 After Italy, Amsterdam was the only other place that was always on our list. And the reason we booked our tickets from Brussels was only because we wanted to go to Amsterdam. It did live up to the hype and it is a unique town in itself. We also visited a few other towns close by while driving to Rotterdam to board our train to Brussels.

Here is our brief itinerary:

We took an overnight train from the Prague main station to Amsterdam Central. It was a 15-16 hour journey in a private cabin for two. We had our own personal washbasin and two bunk beds. Very very comfortable and I just relived all my childhood memories of train travels with my parents. Only things I missed were the cutlets and chai. They did serve us boxed breakfasts in the morning, but well cutlets win over croissants any day. Our route from Prague to Amsterdam was through Germany and it had many lakeside tracks and some German city train station stops. It was a whole lot of fun and I highly recommend doing an overnight train trip in Europe :)

We reached Amsterdam Central station at around 9:30 in the morning. We took our 48 hour day passes and took the tram to our hotel. Our hotel was conveniently located very close to the central station. We realized we wouldn't be able to check in until 3 pm or so, so we freshened up and decided to visit the Van Gogh Museum. Since we hadn't made any advance reservation, we waited for about 30-40 minutes in the queue to get our tickets. But this was one of the better museums I have been to. Very interesting and beautiful paintings. I was amused as to how this guy was obsessed with making his own portraits! Anyhow, once we were done, we headed back to our hotel for a quick nap to energize ourselves for the evening.
Around 6 we left our hotel and took a tram to the central station. From here we just walked till the dam square and spent some time in the beautiful weather looking at people and all the hustle bustle. Then we took a tram to an Indian restaurant, Taj Mahal. After we were done, we took a tram back to the Dam square and decided to visit the Red Light district. I followed the script of the Rick Steve's tour and we stopped at the shop with the famous brownies. It was very crowded though and looking at all the display models was becoming cumbersome while jostling with the people all around you. It took us about a couple of hours to walk the entire area and once we were done, we headed back to our hotel.

We wanted to do the village bike tour, but unfortunately they did not have any tandem bikes. As I am bike challenged, we had no option but to find out a company which offered tandem bikes or tandem bike tours. So, finally, we rented a tandem bike from Rent-a-bike. We got our bike map and decided to bike the city. This was the first time I was tandem-biking and seeing the city on bike. It is so much fun that I would definitely do it all over again. In no time, we were near the Rijksmuseum with the famous "I amsterdam" sign and stopped to take pictures. We skipped visiting the museum as it would have taken a lot of time to get the tickets and visit the museum and biking was so much more fun. From here we biked to the Anne Frank Haus and the Jordan neighborhood. After seeing the long queue at the Anne Frank Haus, we thought we'd come back late in the evening as it is open till 9 pm. So, we biked back to the Dam Square and had lunch at Koh-I-Noor.
From here, we just biked south and figured we were almost out of the main city area as the streets had become wider and there were more cars than bikes! We also saw a couple of bridges open up to let the ships pass. I was excited to have seen that as I was seeing fridge magnets for those all over the city. Next, we were in the Rembrantdplien area where we stopped for pictures. Then we reached the flower market and back to the Dam square on our bikes. Mind you, we got lost and re lost on our bike rides. But it was all the more fun as we were going to totally unexplored areas.
Then we returned our bikes and walked to the Dam square and to the Anne Frank Haus. This place deserves a visit by one and all. It makes you realize what the family went through and it was all real. I still haven't watched the movie, or read the book, but it is on my list now. Getting inside the house took about 45-50 minutes as the queue was very very long, but once inside, it takes another 45 minutes or so. Once done, we walked around and reached the main station and got tickets for a boat ride around the city. Not as much fun as I had thought, but some views were great and got us some nice pictures.
After the boat ride, we went to a Thai restaurant, Bird Thai and had excellent Thai food. With our tummies full, we decided to catch a live show in the Red Light district. Online suggestions didn't help much and it seemed Casa Rosso was the only choice pretty much. It was exorbitantly expensive, but then you wouldn't wanna miss this when in Amsterdam. So, we got our tickets and the show wasn't fun or titillating or enjoyable. We walked out after 10-15 minutes and headed to our hotel to call it a day and get recharged for the next day.
Amsterdam was a  lot of fun, but typically touristy.

Forty minutes north of Amsterdam is a small neighborhood of Zaanse Schans. The windmills here make a picture perfect view of Holland for you. Only constraint was that the parking was free was first hour and then you were charged for 24 hours irrespective of how long you stayed. So we made a quick trip to this place and didn't get inside the working windmill. They are old and historic windmills that you wouldn't wanna miss.

Utrecht is a small university town about an hour south of Amsterdam. We found street parking just outside the city center and took a bus to the city center. Here we walked in quite neighborhood full of small shops. We ended up at the Dom Church and the tower. By now we had been to so many towers, that we gave this one a miss and decided to have lunch at one of the small restaurants close by. Live music in the street made the atmosphere all the more lively. We ate at Taj Indian restaurant and the food was good. We enjoyed sitting outside in a true European style. Then we walked back to the main bus station and took a bus back to our parking spot. There is one main canal in the city and the bus route was along the canal. It was fun to see people kayaking and tubing in the canal.

Our next city stop was The Hague. So we parked on the street and decided to explore the city on foot. This was another hour from Utrecht.We walked towards the main square or The Plein, as it is called. The roads were lined up with shops and boutiques and we spent some time shopping here! The square had a statue in the middle and was surrounded by some historic buildings with great architecture. Then we walked around this historic area taking pictures and landed in the Chinatown. From here, we walked toward our car and stopped at mall to shop again. This was one of the bigger cities after Amsterdam that we had stopped at. I am sure there is much more to see, but we had to just get to Brussels that night!

A few minutes away from The Hague, this would be the last city on our list as we were running out of time. This is also a small town full of canals. Since it is much smaller and less popular, this place was truly fun because of less crowds. Since parking is limited and restricted only to parking lots, we took about 30 minutes just following the directions and getting to a parking lot. Anyhow, when we finally managed to park and get out, we had landed right in the middle of the city. We were in the pedestrian only market area close to the old church. We walked along the canals, explored some shops and took a lot of pictures. We had parked very close to the Old church, but it was closed I think and we couldn't get in. By the time we were done walking around, we got hungry! We ate at Pure Funky Burgers and I highly highly recommend this place. The best veggie burgers I have ever had. Do not miss them. We got back to our car from here and headed to our next city, Rotterdam.

We drove to the Rotterdam airport from Delft. Returned our car and took the bus to the central train station. We reached pretty late around 8 30 pm or so. There wasn't anytime to explore the city so we headed straight to the ticket counter. These were the only inter city tickets we hadn't bought and as Murphy says, if there is anything that can go wrong, it will. The ticket counter was taking horrendously long time to service the customers, so we decided to buy the ticket online and to our surprise the last train to Brussels was at 9 pm and it was already 8 50 or so. There was one train change at Roosendaal which gave us only 3 minutes, but we were hopeful of using our running skills and making the connections. Anyhow, we bought the tickets and ran towards the platform. The screen showed next train to Roosendaal from platform number 6 and we got on to the train. While on the train we realized that this train would never make it to Roosendaal on time, in fact it would take 30 more minutes. Confused we asked the staff and they told us there were two trains to Roosendaal. A quick transfer plane on platform 7 and a slow transfer plane on platform 6. We didn't read the screen after platform 6 -Roosendaal. So, we were on the wrong train. This meant waiting till 5 am for the next train from Roosendaal to Brussels.
So we got off at the train station and went the Best Western right outside the station. Here the receptionist suggested we take a cab to Brussels which would take less than two hours. We liked the idea and decided to take the cab and there we were, late, very late in fact and very very tired, but in Brussels, finally!