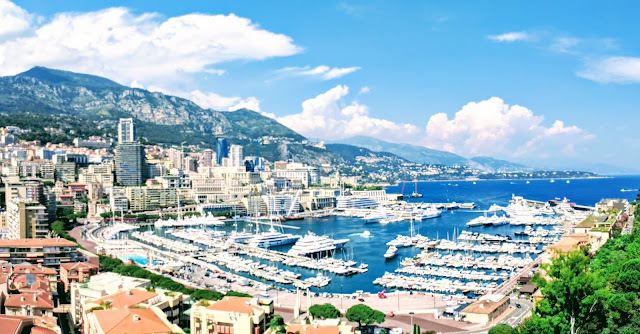 Monaco gets its special page because it is an independent country and I do not want to put it under the South France page! More about the South France itinerary is on its dedicated page. This page is about our day in Monaco.

Conveniently connected by trains from nearby cities. It was a twenty minute ride from the Nice train station. Train tickets may not be available or the trains cancelled, so check early on the day off or the day before and get tickets.
While I took the train, Sumit was biking from Nice to Monaco. On his way, he stopped by a cute town Eze, a popular stop over for a hopping southern coast tour.
We both reached around the same time, but rendezvous was a nightmare. Here is what happened. Since Monaco is a different country, our phones that were working fine in France, didn't immediately start working in Monaco. I had a bad connection and no wi-fi at the train station, so I couldn't connect with him. We had initially planned to meet at the Oceanography museum, but I couldn't get a taxi. During the intermittent signal calls I got, we decided to meet at the famous pool located in middle of the city by the docks.
However, I had come up to the second floor exit of the station and figuring out how to get there was a nightmare. It was right in front of me, I could seeit , but when I stepped out, I couldn't find a road leading up to it. Thankfully I went back into the station and found a help desk. So, this city is vertical and horizontal! I was at the wrong floor. I had to exit on a different floor and just take the stairs all the way down and walk straight for 10 minutes to get to the pool, or the La Condamine area. but I spent an hour figuring this out and with no connectivity I was almost prompted to head back to Nice.
So when you get here, take a deep breath, ask someone and find the right exit and navigate correctly and not just rely on the google map as it doesn't have capability to navigate vertically!
Also, while you are the the tourist information office or the help desk, make sure to get a tourist map to help you navigate.

Initially, I had planned on following this walking map I had created. After our fiasco, we met at the pool. First, we grabbed lunch at on of the many restaurants around the area. Sumit left his bike securely fastened to a lamp pole near the restaurant. Food was good.

Next up, we decided to follow our tourist map and go to the Prince's palace, many steps later we were outside the palace and got really good views of this tiny little city-country. Some souvenir shops are close by. There is also an oceanography museum and a view point located close by, but we ditched that and decided to head out straight to the Casino, Monte Carlo.

We walked to the Casino Monte Carlo and what a sight! Luxury cars lined outside. I think there was an entry fees, but I don't remember now. the interiors are so royal and opulent, it was much more royal than I had expected. Of course you aren't allowed to go inside to all the game rooms as I guess they are reserved for some "A-list" people.

We then walked back to the La Condamine area and settled in a restaurant to watch the France vs Belgium semi final at a restaurant. The atmosphere was electric and there were of course French supporters everywhere.

After the match, we headed back to Nice via train. This time we had no issues going to the station and yes, we took the stairs and the elevators. Pretty convenient if you do that and follow the tourist information map. The city oozes luxury and clearly you see it would be the richest per capita country in the worls.